The eigenvectors x remain in the same direction when multiplied by the matrix (Ax = λx). An n x n matrix has n eigenvalues.

So today begins eigenvalues and eigenvectors. And the reason we want those, need those is to solve systems of linear equations. Systems meaning more than one equation, n equations. n equal 2 in the examples here.

So eigenvalue is a number, eigenvector is a vector. They're both hiding in the matrix. Once we find them, we can use them. Let me show you the reason eigenvalues were created, invented, discovered was solving differential equations, which is our purpose.

So why is now a vector-- so this is a system of equations. I'll do an example in a minute. A is a matrix. So we have n equations, n components of y. And A is an n by n matrix, n rows, n columns. Good.

And now I can tell you right away where eigenvalues and eigenvectors pay off. They come into the solution. We look for solutions of that kind. When we had one equation, we looked for solutions just e to the st, and we found that number s. Now we have e to the lambda t-- we changed s to lambda, no problem-- but multiplied by a vector because our unknown is a vector. This is a vector, but that does not depend on time. That's the beauty of it. All the time dependence is in the exponential, as always. And x is just multiples of that exponential, as you'll see.

So I look for solutions like that. I plug that into the differential equation and what happens? So here's my equation. I'm plugging in what e to the lambda tx, that's y. That's A times y there. Now, the derivative of y, the time derivative, brings down a lambda. To get the derivative I include the lambda.

So do you see that substituting into the equation with this nice notation is just this has to be true. My equation changed to that form. OK Now I cancel either the lambda t, just the way I was always canceling e to the st. So I cancel e to the lambda t because it's never zero. And I have the big equation, Ax, the matrix times my eigenvector, is equal to lambda x-- the number, the eigenvalue, times the eigenvector. Not linear, notice. Two unknowns here that are multiplied. A number, lambda, times a vector, x.

So what am I looking for? I'm looking for vectors x, the eigenvectors, so that multiplying by A-- multiplying A times x gives a number times x. It's in the same direction as x just the length is changed. Well, if lambda was 1, I would have Ax equal x. That's allowed.

If lambda is 0, I would have Ax equals 0. That's all right. I don't want x to be 0. That's useless. That's no help to know that 0 is a solution. So x should be not 0. Lambda can be any number. It can be real, it could be complex number, as you will see. Even if the matrix is real, lambda could be complex. Anyway, Ax equal lambda x. That's the big equation. It got a box around it.

So now I'm ready to do an example. And in this example, first of all, I'm going to spot the eigenvalues and eigenvectors without a system, just go for it in the 2 by 2 case. So I'll give a 2 by 2 matrix A. We'll find the lambdas and the x's, and then we'll have the solution to the system of differential equations. Good.

So here they are for this matrix. So I've got the answers now. y of t, which stands for y1 and y2 of t. Those are-- it's e to the lambda tx. Remember, that's the picture that we're looking for.

So that's A times Ax, right? One A, another Ax. But Ax is lambda x. Are you good with that? That's just A times Ax. So that's OK. Now lambda is a number. I like to bring it out front where I can see it. So I didn't do anything there. This number lambda was multiplying everything so I put it in front.

Conclusion. The eigenvectors stay the same, lambda goes to lambda squared. The eigenvalues are squared.

So let's just write down the conclusion. Same reasoning, A to the n-th x is lambda. It's the same x. And every time I multiply by A, I multiply by a lambda. So I get lambda n times. So there is the handy rule.

And I want to know what about its eigenvectors. And the answer is same, same x's. Same x. I show that by figuring out what I have here. This is Ax, which is lambda x. And this is c times the identity times x. The identity doesn't do anything so that's just cx.

So as long as I keep working with that one matrix A. Taking powers, adding multiples of the identity, later taking exponentials, whatever I do I keep the same eigenvectors and everything is easy.

OK. I'll stop there for a first look at eigenvalues and eigenvectors. 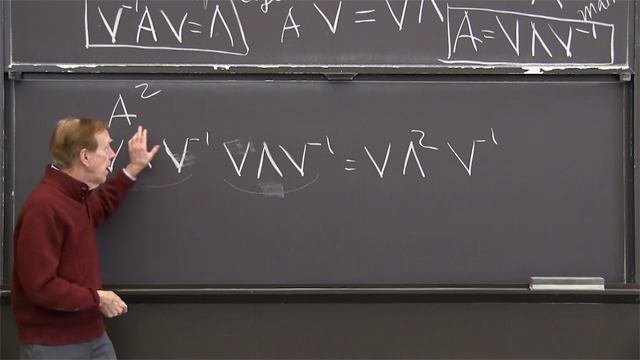