A matrix can be diagonalized if it has n independent eigenvectors. The diagonal matrix Λis the eigenvalue matrix.

Matrix notation. Those were the eigenvectors. This is the result of A times V. But I can look at this a little differently. I can say, wait a minute, that is my eigenvector matrix, x1 and x2-- those two columns-- times a matrix. Yes.

So do you see that the two equations written separately, or the four equations or the n equations, combine into one matrix equation. This is the same as those two together. Good. But now that I have it in matrix form, I can mess around with it. I can multiply both sides by V inverse.

So I multiply both sides by V inverse. V inverse times V is the identity. That's what the inverse matrix is. V inverse, V is the identity. So there you go. Let me push that up. That's really nice. That's really nice. That's called diagonalizing A. I diagonalize A by taking the eigenvector matrix on the right, its inverse on the left, multiply those three matrices, and I get this diagonal matrix. This is the diagonal matrix lambda.

Or other times I might want to multiply by both sides here by V inverse coming on the right. So that would give me A, V, V inverse is the identity. So I can move V over there as V inverse. That's what it amounts to.

I multiply both sides by V inverse. So this is just A and this is the V, and the lambda, and now the V inverse. That's great.

And if I did it n times, I would have A to the n-th what would be the lambda to the n-th power V inverse. What is this? What is this saying about? This is A squared. How do I understand that equation? To me that says that the eigenvalues of A squared are lambda squared. I'm just squaring each eigenvalue.

So, the stability. What happens as I multiply, take powers of a matrix, is a basic question parallel to the question what happens with a differential equation when I solve forward in time? I think of those two problems as quite parallel. This is taking steps, single steps, discrete steps. The differential equation is moving forward continuously. This is a difference between hop, hop, hop in the discrete case and run forward continuously in the differential case. In both cases, the eigenvectors and the eigenvalues are the guide to what happens as time goes forward.

OK. I have to do more about working with matrices. Let me come to that next. Thanks. 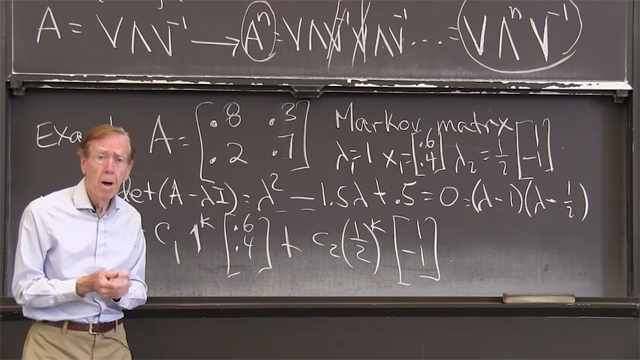