how to interpolate outside the domain of x? 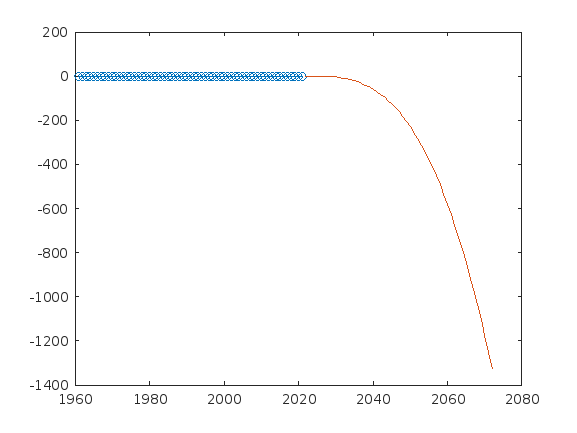 ⋮
Edited: Jan on 8 Nov 2022
What do you expect instead? Note that there is an infinite number of functions to fit these data. An extrapolation is pure guessing, if you do not have a model, which defines a function to be fitted.
If you e.g. fit the parameters of a polynomial, the values outside the defined range will explode soon. With fitting a sine wave, you can be sure, that the data are repeated without increasing y values and in a periodical form.
But without a physical model and extrapolation is not meaningful. An example:

Steven Lord on 8 Nov 2022
⋮
Ran in:
From Mark Twain's "Life on the Mississippi", a quote on the potential danger of extrapolation.
"In the space of one hundred and seventy-six years the Lower Mississippi has shortened itself two hundred and forty-two miles. That is an average of a trifle over one mile and a third per year. Therefore, any calm person, who is not blind or idiotic, can see that in the Old Oolitic Silurian Period, just a million years ago next November, the Lower Mississippi River was upwards of one million three hundred thousand miles long, and stuck out over the Gulf of Mexico like a fishing-rod. And by the same token any person can see that seven hundred and forty-two years from now the lower Mississippi will be only a mile and three-quarters long."
As an example of this in MATLAB, if we take a look at the standard census data set:
load census
plot(cdate, pop, '-o')
title('Population of the United States from census data') 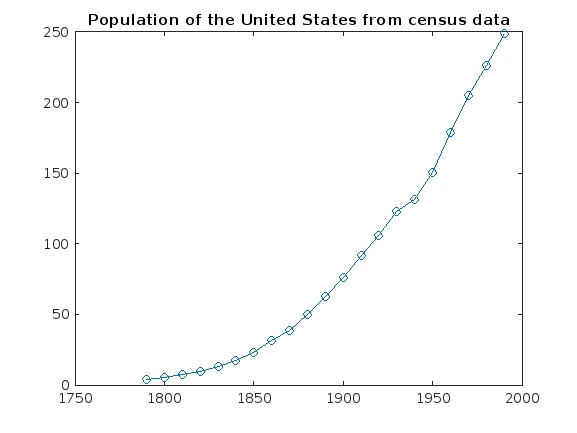 Image Analyst on 8 Nov 2022
⋮
If you want to fit an exponential, see the attached demo.