Trouble finding more than one solution with solve 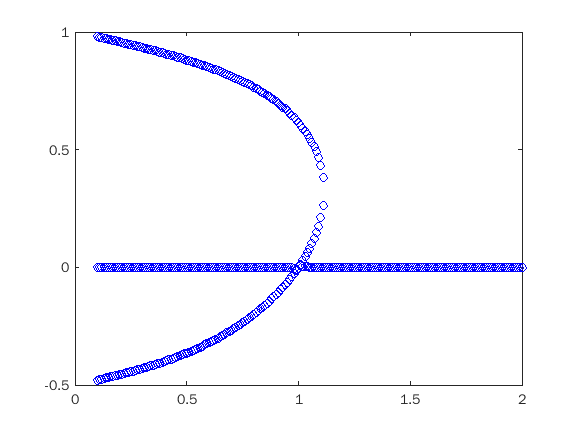 ⋮
Hi @Paul
Thanks for this solution! From the plot you gave, it seemed really promising. However, when I ran the code for myself and had a look at Sd, I could see that there was a point where it failed to find all three solutions when there are meant to be three and at others there were even 4 solutions.
Also, how would you go about separating the three solutions into three lines as I have in the plot in this comment?

⋮
Hi Timothy,
If any value of T_star yielded four solutions, then S (not Sd) would have four columns. But S only has three columns. Can you tell me the value of T_star where you see four solutions?
Similarly, which value of T_star did not find all three solutions? This code looks for sign changes in y1, so it will miss a case where an element of y1 is exactly equal to zero. So you'd have to look for that special case.
Also, with a brute force approach such as this, it's possible to miss a zero if OPval isn't dense enough. I was original using a spacing of 1e-6, but that was taking forever for erfi() to run.
Did you link to the correct comment? In any case, for any value of T_star you'll have to figure out how to sort the values of OPzeros so they are consistent with results from the previous value of T_star. Given the apparent structure of the of the solution, that might not be too difficult, beause one root seem so to be always zero, and the others are monotic if they exist. I vaguely recall a post here not too long ago that considered a very similar, if not identical, problem and had a very clever solution. Don't recall much more about it than that.

⋮
Hi Paul,
Oh okay, my apologies! I thought that I should be looking at Sd. I had at look at S and everything seems fine apart from getting NaN at the point where the blue dotted line on the plot from my comment on the previous answer crosses the black line. I'd assume that the solution at this point is exactly 0 so I'll take your explanation for it and manually insert the solution I guess.
In that case, looking at S, I don't think it will be too difficult to figure out a way to sort the values.
Thanks again for your solution!

⋮
At OP = 0 exactly, the Ms(i) is 0 / 0 which give NaN. But if you take left and right limit, then from both directions the result is 0, so for that case in theory you can substitute 0 for that NaN.

⋮
Nothing to apologize for. I'm still confused about references to Sd here, as my code doesn't have an Sd defined.
Anyway, please keep in mind that the solution doesn't return NaN, at least not in the way that I think of that. I was just using the NaN values to initalize S so that a) I woulnd't have to use a cell array in case a different number of OPzeros were returned for different values of T_star, and b) so it would be easy to see how many solutions were actually returned for different values of T_star, and c) so it would be easy to plot the result because plot() ignores NaN values.
As for the situation at OP = zero, I'm not convinced that OP = 0 is a root of MS for all values of T_star and a double root at T_star = 1. As @Walter Roberson pointed out, the limit of MS may be 0 as OP approaches 0, but I'm not sure that means OP is a root, unless you were to explicity define MS that way, e.g.,
MS(OP) = { 0 for OP = 0; etc, for OP ~=-0}
Regardless, if we assert the root at OP = 0, there's no need to solve for it numerically and the entries in S above that correspond to the root at OP = 0 can be fixed accordingly. If you look at the row of S that corresponds to T_star = 1, you should see that my code didn't even find the root at OP = 0. I think that's because T_star = 1 is a special case where MS doesn't change sign on either side of OP = 0.
The prototype code above uses linear interpolation to approximate the solution. No reason a few more points couldn't be used with cubic or spline interpolation if you see a need to do so.

⋮
@Walter Roberson
Did you mean "in theory" in the mathemetical sense, i.e., that there is a theory that applies in this situation? Or did you mean it in the sense that because the limit is zero, we can just define MS(0) = 0 and get on with things? I guess it depends on whether or not @Timothy Le cares about what happens at OP = 0.

⋮
Every closed compact set near OP = 0 gives 0, for every finite value of T_star , and there is no specific definition of MS at OP = 0 that would disagree with 0. Complex Analysis say that means that the limit in that situation is 0. 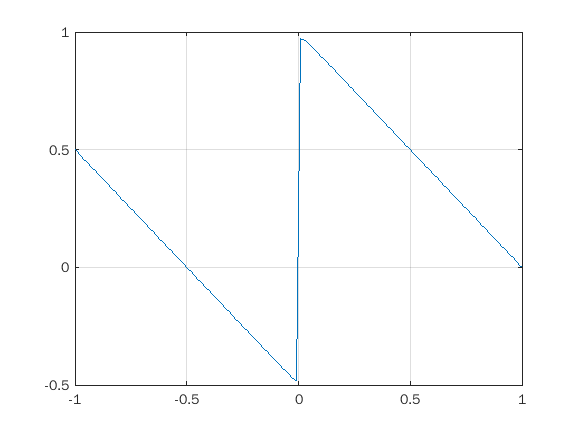 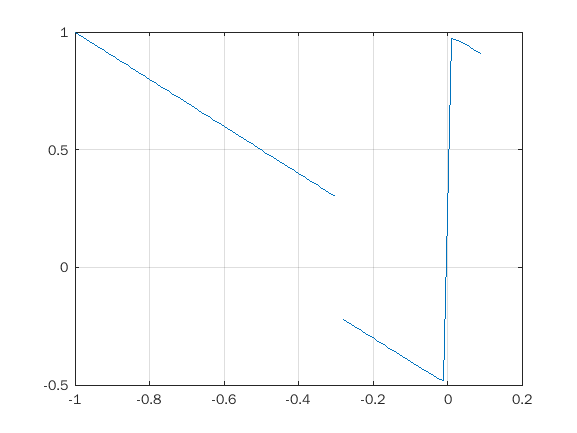 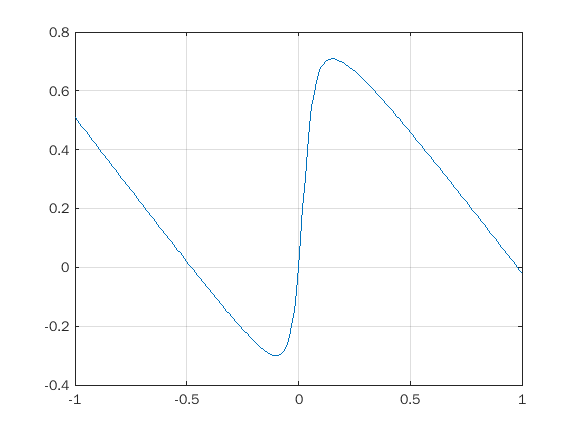 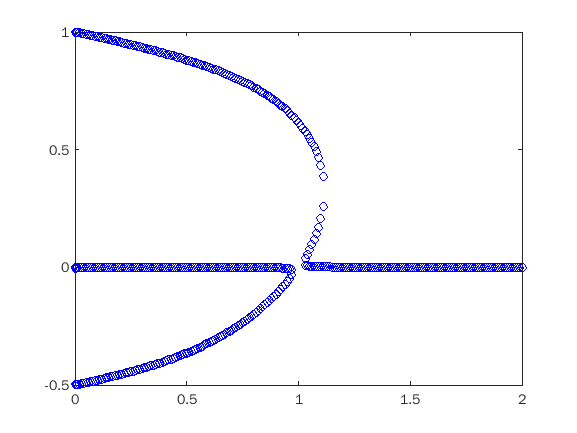 I did not explore what's happening at T_star = 1.

⋮
Those erfi() lead to quite inaccurate computations when you use matlabFunction()

⋮
@Paul
I don't recall him mentioning this and had a quick look and didn't find anything. Perhaps I missed it.
I don't know much about the singularity moving, part of my dissertation is finding out how V0 affects things so I'm going into this with no idea what to expect haha. That's the reason why I wanted a better code for solving the equation because the code that I wrote took way too long (more than 24 hours to run!) when V0 ~= 0.
I don't think what's happening at T_star = 1 is important. It's probably beyond the scope of my dissertation. I just need to see how it changes and discuss it really and then compare it to simulations.
I just ran your code for an interval of 0.001 and it seems to have worked fine, thank you!

⋮
@Walter Roberson
Would it be better to vpa the function to get rid of erfi then? Sorry if this is a silly question, I'm not much of an expert when it comes to MATLAB :)

⋮
See the "Note: several paragraphs down in https://www.mathworks.com/matlabcentral/answers/1705785-trouble-finding-more-than-one-solution-with-solve#comment_2129175

⋮
When you have a symbolic expression, the symbolic toolbox can rewrite it to any equivalent form, and the order of evaluation is not locked in. For example
f(x)/(A*x+b)
with constant A and b might be internally represented as (1/A) * f(x) / (x + (b/A)) but the actual order of the division might change as you know more about f(x)... and the whole internal approach sometimes gets rewritten if you have a negative!
If you end up substituting a rational value for x, the expression might get reordered. simplify() might reorder further. The question of which order the expression will "really" be evaluated is pretty difficult to answer.
When you vpa() you do not change which functions are called, but you do trigger the symbolic engine to choose some particular order of operations, and convert rational constants to software floating point (except for exponents), and try to do numeric approximations for all functions that do not have unbound variables.
vpa() would not rewrite erfi with a unbound variable into something like an infinite sum: if there is an unbound variable it would leave it as a symbolic call to erfi.
matlabFunction goes further in binding to a very specific and inflexible order of operations, to be evaluated at 53 bits. If the erfi is close to 1 or close to 0, the loss of precision by working with double precision can be crucial.

⋮
@Paul
I ended up using your method of solving the equation in my code. My sincere thanks for your help with this!
Also thanks to @Walter Roberson and @Star Strider for their inputs, I really appreciated it!