Updates to the Electronic Edition

This page tracks updates to the electronic edition of Numerical Computing with MATLAB that have not yet been incorporated in the print edition.

June 22, 2004: Section 2.11, PageRank and Markov Chains. Improve the handling of pages with no out links. Our previous algorithm inserted a column of 1/n's in the connectivity matrix, thereby reducing the sparsity. We now do the same calculation implicitly, preserving the original sparsity. MATLAB file pagerank.m incorporates this improvement.

December 26, 2005: The exercises at the end of Chapter 7 are now the same in the electronic and print editions.

February 18, 2008: Second printing includes the revision of the section on Google PageRank that improves the handling of web pages with no out links, a short new section in the Random Numbers chapter, removal of material on "inline" and "feval", and correction of a few dozen minor typographical errors. All function function programs in ncm that mentioned "inline" or "feval" have been updated.

The second printing of the SIAM paper edition should be available later in 2008.

September 16, 2013: A significant update incorporates over 60 changes. Many of them have been recommended by Professor Zhiyong Zhang of Nanjing University of Posts and Telecommunications in China (NJUPT), who prepared a Chinese translation for BUAA press. The census example in section 5.3 includes the 2010 census. Output from "format long" shows 16 significant digits. Symbolic Toolbox usage reflects the MuPad connection. 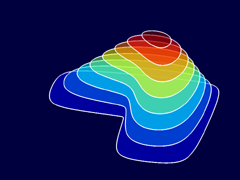 Up close with Gilbert Strang and Cleve Moler.