Óscar Poveda on 18 Mar 2021
⋮
Commented: Óscar Poveda on 25 Mar 2021
Accepted Answer: Kiran Felix Robert
Hi!
I am trying to update a block parameter of simulink during the simulation. In my case, I want to update the parameter "Lookahead distance (m)" depending on the current velocity of my vehicle. 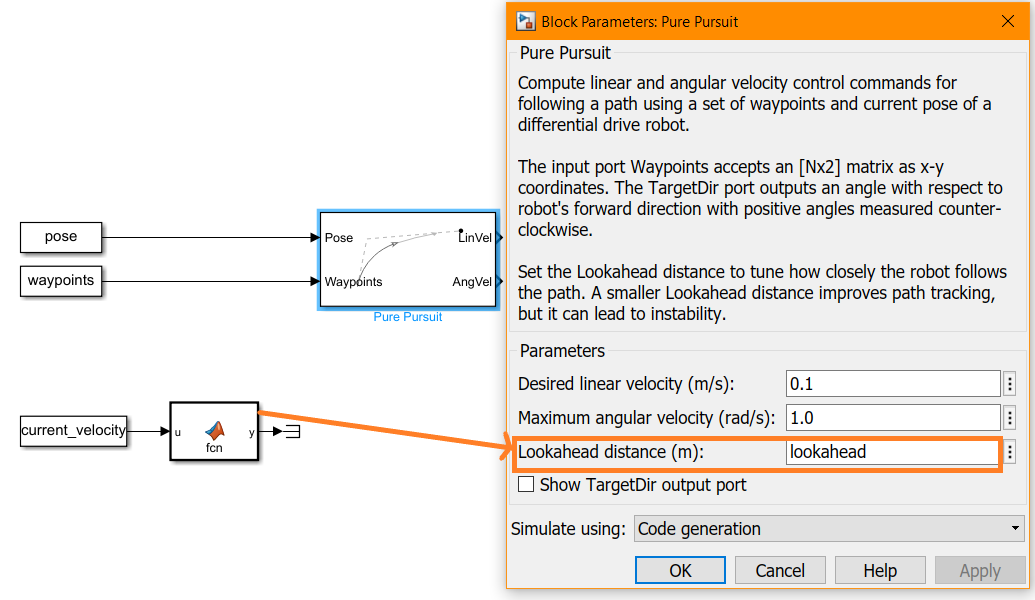 First i thought using a MATLAB Function block, whose input is the current velocity and then a variable called "lookahead" is calculated. Then i wrote this variable in the "Pure Pursuit" block, so i thought that changing this value inside the MATLAB function would have changed the value of the variable inside the block. Instead, it's value is constant during all simulation (the value predefined in the MATLAB workspace before running the simulation).
So, there is a way to change a block parameter in Simulink in each time step?
Thank you all,
Óscar

Kiran Felix Robert on 22 Mar 2021
⋮
Edited: Kiran Felix Robert on 22 Mar 2021
Hi Oscar,
Refer this answer thread for details about updating Simulink block parameters at run time. The reason why the variable is not updated is also clearly explained in this answer.
Also refer this MathWorks blog page about similar issue. This explains the difference between Block Parameter and Simulink Signals.

⋮
Thank you so much! It was so helpful.
Óscar.