Roadmap - how to save the graph generated?

mirella melo on 3 Dec 2020
⋮
Commented: Karsh Tharyani on 10 Dec 2020
Accepted Answer: Karsh Tharyani
Hello. I have two occupancy grid. In one, I expect to generate a roadmap (PRM - probabilistic roadmap) with 100 nodes. Later, I want to reproduce the same nodes in the second map.
1: I'd like to handle the X Y variable of all nodes randomly generated in grid_1. How can I do that, please? Also, how to know the total number of paths generated?
2: Although I can't handle the random nodes, I'm able to replicate them using rng (random number generator), but in case the node in the second map is located in an occupated area, the algorithm generates another random number, which this is not what I want. For example, in grid_1, 100 nodes were generated. From those, only 90 is located in the free area on the grid_2, so I'd like to reproduce only those 90.
So far, this is how my code is:
image_1 = imread('image_1.pgm');
image_1 = image_1 < 250; % convert it to binary
map_1 = binaryOccupancyMap(image_1, 0.05); % convert it to occupancy grid map
rng(1) % save the random number generator
prm_1 = mobileRobotPRM(map_1, 100); % PRM
show(prm_1) % show paths, nodes and grid all together
image_2 = imread('image_2.pgm'); % load a different but pretty similar grid map image
image_2 = image_2 < 250;
map_2 = binaryOccupancyMap(image_2, 0.05);
rng(1) % use the saved random number generated
prm_2 = mobileRobotPRM(map_2, 100);
show(prm_2)
And this is my images: 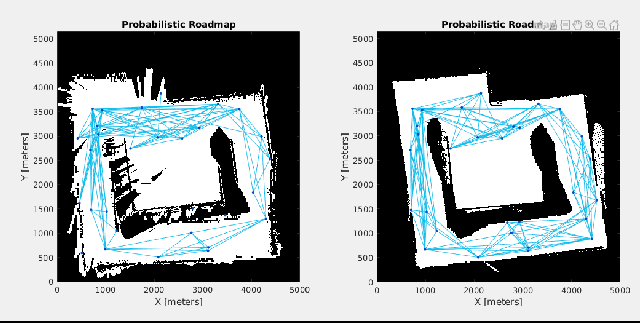 Karsh Tharyani on 7 Dec 2020
⋮
Edited: Karsh Tharyani on 7 Dec 2020
Hi Mirella,
Thanks for your question. Please feel free to comment above in case I misunderstood something.
1) Currently, mobileRobotPRM doesn't output the underlying connectivity i.e., the nodes and the edges. If it did, one could obtain the node information (the coordinates on the map). Additionally, one could also obtain all the possible paths between a start and goal location from the output graph.
2) As you rightly pointed out, in order to generate the same set of nodes, you would have to fix the random number generator. However, please note that your maps are not identical (from what I see above). Thus, during the random nodes generation, if a node is occupied, another location will be randomly chosen in the map(this ensures that there are exactly "n=100" nodes generated in the roadmap). Even if you manage to get the same set of nodes, the underlying connectivity can also be different if the edges are not free. If an iteration counter was given instead, you could probably get around this.
I shall convey these requests to the respective team and these might be incorporated in a future release of MATLAB.
Please let me know if this answers your question.
Best,
Karsh

⋮
Hi, Karsh. Thanks for your reply! I think you perfectly understood.
To give you a bit more context: these two maps are different because they are formed by using two different technics, and what I'm trying to do is to define how equivalent they are for navigation purposes. To make it, I thought of replicate from one map to another the nodes and paths (the possible ones) to quantify how many nodes and paths are lost. Does it make sense?
Given that, for now, I have limited access regarding the graph, do you have any suggestion about what I can do using Matlab features to define any relation with these maps (related to navigation)?
Thanks in advance!

⋮
Hi Mirella,
It seems like you are trying to compare "navigability" of two maps, which is quite open-ended and really depends on your application.
I would suggest reaching out to Technical Support https://www.mathworks.com/support/contact_us.html. describing your workflow to them, and conveying any specific analyses/metrics that your workflow demands.
Best,
Karsh