What is the best way to implement thousands of data in multiple matrices ?

V.D-C on 18 May 2020
⋮
Commented: V.D-C on 18 May 2020
Accepted Answer: Stephen23
Hello,
I have a folder with 10.000 .mat files, each of them is a structure with 8 different variables (one value each).
Each of these files is named accordingly to the row and column it is corresponding to in a 330x300 matrix (eg 123_25 is the file with the values of the 123th row and 25th column).
I have 8 matrices 330x300 in size, one for each variable and filled with NaNs. I would like to know which technique is the best to insert the values of my .mat files into these matrices ?
So far I tried 2 methods:
%% Example
load the 8 matrices
for j = 1:330
for k = 1:300
load([j '_' k '.mat']);
matrix_1(j,k) = j_k.variable1;
matrix_2(j,k) = j_k.variable2;
matrix_3(j,k) = j_k.variable3;
etc . . .
end
end
%% Example
% I create n.matfile() for each matrix
for i = 1:numel(list_names)
save('-v7.3',[temp_folder list_names{i} '.mat'], list_names{i});
m.(list_names{i}) = matfile(list_names{i},'Writable',true);
end
%%% list_names is a list with the names of the variables. In this example the list would go from matrix_1 to matrix_8
for j = 1:330
for k = 1:300
load([j '_' k '.mat']);
m.matrix_1(j,k) = j_k.variable1;
m.matrix_2(j,k) = j_k.variable2;
etc . . .
end
end
By going into the matlfile documentation I read that the most efficient way to deal with it would be to load everything at once in the memory and do all the replacements. Please note than the 10.000 files altogether are never heavier than 250Mb, and my pc has 16Gb of RAM.
I would like to try another method which would be:
Loading all the .mat files in the memory, loading the 8 matrices, inserting all the values with a loop without loading the files at every iteration. However I face a difficulty which is that my .mat files may have a different name, but they are all constructed the same way. So when I load a file and have it in the workspace, if I load another file it replaces the previous one, hence I can not load 2 files at the same time. Is there a way to load these files altogether at once even though they are built the same way, or is there a way to create dynamic names for variables (I know it is a bad idea) so I can load more than 1 file at a time ?
Finally, which method would be the fastest ? Maybe there is another one I didn't think of ?
I hope I was clear in my explanations, if not I apologize and I will try to explain again as clearly as possible.
Have a good day and thank you !

Stephen23 on 18 May 2020
⋮
Edited: Stephen23 on 18 May 2020
I would not use either of the first two methods, because they are an easy way to get latent, almost undetectable errors in your data. You might assume that your data is perfect and write your code accordingly, but that is not a robust approach. Consider what would happen if one of the files is missing any of those variables: the variable value from the previous loop iteration would get used without any warning whatsoever. No doubt you will say "but my data are perfect and are not missing anything..." sure, sure.
Much more robust (and more efficient) is to ensure that every file imports the required data:
S = load(...);
and the simply access the fields of the structure S:
S.var1
S.var2
...
This also answers your next question:
"is there a way to load these files altogether at once even though they are built the same way"
Of course, this is MATLAB, so just use a structure array! If every mat file contains exactly the same variable names (as they should) then your task is easy, you can just do this:
S(j,k) = load(...)
If the mat files contain different variable names then go and yell at the person who created them.
"is there a way to create dynamic names for variables ...so I can load more than 1 file at a time ?"
Importing multiple files can be done simply and efficiently using indexing into one array, there is absolutely no need to use ugly, slow, inefficient, complex, overused-by-beginners dynamic variable names.
https://www.mathworks.com/matlabcentral/answers/304528-tutorial-why-variables-should-not-be-named-dynamically-eval

⋮
Thank you very much for your detailed answer !
About the first methods, would I keep myself out of trouble if I just clear the data from the workspace at the end of every iteration, and put a safe inserting NaNs in case there are no value in the file ?
I will try your method and evaluate how much faster it is compared to my previous codes.
I will accept your answer by the end of the day, I just want to keep it open a few more hours in case somebody has another idea that I can try !

⋮
"I keep myself out of trouble if I just clear the data from the workspace at the end of every iteration, and put a safe inserting NaNs in case there are no value in the file ?"
Clearing those variables would avoid accidentally using data from previous iterations, but clearing is an attempt to micro-manage MATLAB's memory management and can slow things down. In simple cases like this loop, it is usually easier and more efficient to leave the memory management up to MATLAB.... but ultimately you have to run some comparisons and see what happens.
"I will try your method and evaluate how much faster it is compared to my previous codes."
Please post the results here, I am also interested to know how it goes.

⋮
I was a bit too optimistic when I tried to make your code work, I sadly don't have a lot of experience in coding and everything takes a lot of time. I will mark your answer as "accepted" and as soon as I have the results I will post them here.
I'm just having troubles with loading the variables into 1 structure since the variables are in a substructure in a structure. I will come back when I'll find a way to make it work. 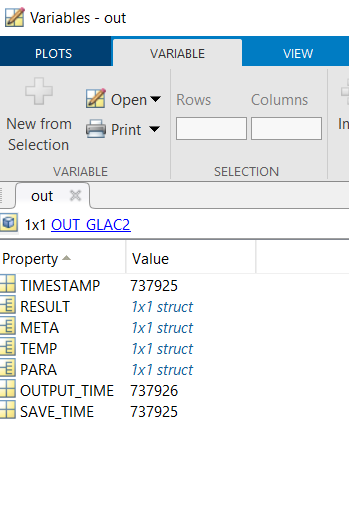 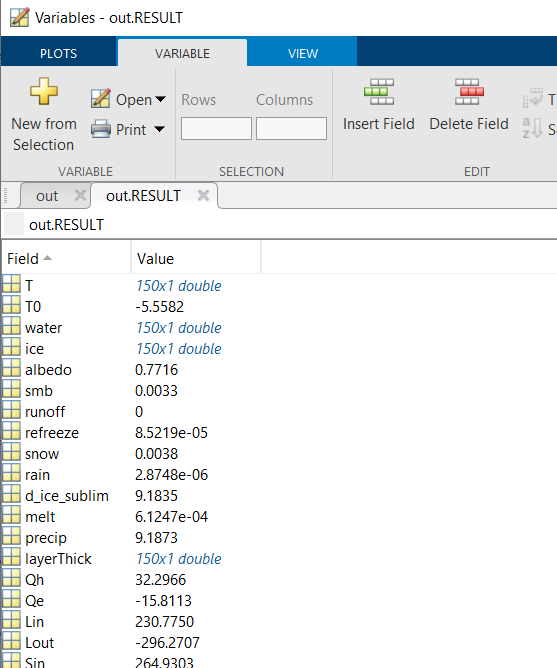 ⋮
Edited: Stephen23 on 18 May 2020
"I'm just having troubles with loading the variables into 1 structure "
It looks like you did something like this:
out = load(...);
in which case (if every file contains exactly the same variable names) you can allocate that scalar structure to a non-scalar structure using indexing:
S(j,k) = out;
You provided lots of screenshots but did not actually state which structure fields you want to store. If you don't want to store all of that imported data, then just pick the field you want, e.g.:
tmp = load(...);
S(j,k) = tmp.RESULT;

⋮
Thank you again !
I only want to import the variables in the RESULT substructure. The other ones are not important but have to be saved in case somebody wants to take a look at the other parameters.
I tested you suggestion and it works !! Hopefully this solution will stick with me for my whole programming life :)
So thank you very much for your answers !!

⋮
Hello, thank you for your answer !
I didn't think at all of doing it this way, I will try it !