Generate pair of random numbers with respect to a sum constraint?

Michael Ziedalski on 21 Feb 2018
⋮
Commented: César on 26 Mar 2019
Accepted Answer: Roger Stafford
Hello, all. So I am still gaining experience with Matlab and am currently trying to generate sequences of two numbers, x and y, such that their sum is <= 1. The naive way I immediately thought to do this would be by 1) generating x within the range [0, .5], and 2) keep generating y until it is < x, which would guarantee my condition, but introduce some significant statistical bias.
Is there some standard, statistically robust way to do this, guys? I would be very grateful for any of your input on this matter. 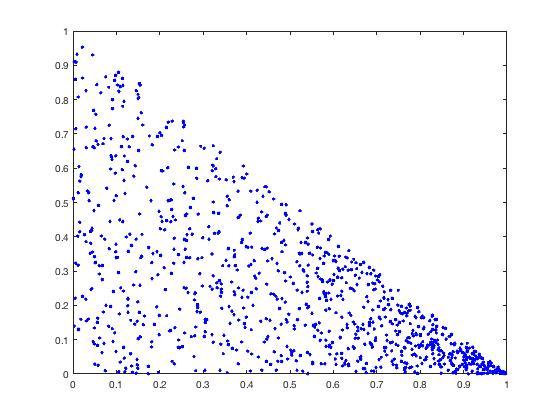 As you can see, the lower right corner is much more densely populated than the upper left corner. That seems wrong, since x and y were given no relative priority, only that the sum must not exceed 1. So as I said, while it technically satisfies the stated requirement, it is not a uniform sampling.
The trick is to use a sqrt in there, as Roger showed in his answer. So if we do the same as above, but generate x as:
x = 1 - sqrt(rand(N,1)); 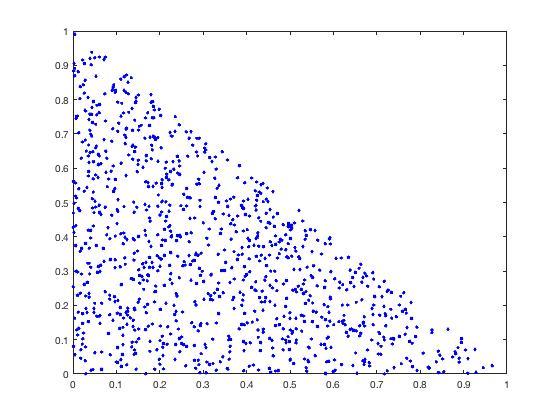 This now looks reasonably uniform, and can be shown to yield a true uniform sampling as N-->inf.

⋮
Thank you for going the extra mile and providing these nice graphs! What happened in the first graph was what I suspected would happen if one used some naive way of ensuring the condition. Would you care to elaborate more on the math that brought you to take the square root of the previous number? Or mathematically know that the area would be a triangle characterized by those points?
I can intuitively see why a triangle describes the area here, but in higher dimensions it would be difficult, and I would very much appreciate a pointer in the right direction on the math involved.

⋮
Dear @Roger Stafford,
Could you please give also some explanations of how do y = (1-x).*rand(N,1) give the correcrt distribution please?