Zac Sutton on 12 Sep 2022
⋮
Commented: Zac Sutton on 13 Sep 2022
Accepted Answer: Matt J
I'm building an app with Matlab 2022a that needs to be backwards compatible at least back to 2018b. In the uneditable section of the code that sets up the appearance of the app, there is a section that defines the object "app.GridLayout" which is an instance of the "matlab.ui.container.GridLayout" class. So far, so good since the class is defined in the 2018b release.
However, the uneditable code later tries to set
app.GridLayout.Scrollable = 'on'
(it is 'off' by default), and unfortunately the "Scrollable" property isn't defined in the 2018b release. This of course results in an error when I run the app with 2018b.
The thing is, I don't need the scrollable functionality. So if I could just remove that line, the property would never be referenced at all, and I think the app would work in 2018b. My issue is that the app.GridLayout object does not appear to be an object you can physically interact with in the "Design View", so there's no "Scrollable" check box I can untick to delete the line of code.
Any ideas how I could work around this?

⋮
It seems like I can't open the app in App Designer 2018b. When I try, I get "App designed in newer version of app designer, cannot be opened for editing".
The frustrating part is that I know for a fact that it would work in 2018b if not for a few refrences to various object properties that are automatically coded by App Designer. I may just make the entire app programatically outside of App Designer.

⋮
If you need to rebuild, you can also write it in code yourself.
GUIDE has an option to generate code. Does AppDesigner have something similar? 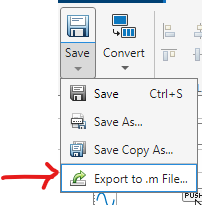 ⋮
Yeah, this is probably how I'll end up handling it. Thank you!