Mathan on 22 Apr 2022
⋮
Commented: Voss on 22 Apr 2022
Accepted Answer: Voss
Hi all,
I was trying to get a skyplot for 15 different satellites but it seems that the colors in the legend is repeating. I actually wanted to give unique colors for the individual satellites, and tried the following:
initialColorOrder = get(gca,'ColorOrder') % to display the initial colors
newDefaultColors = copper(15)
set(gca, 'ColorOrder', newDefaultColors, 'NextPlot', 'replacechildren')
newColorOrder = get(gca,'ColorOrder') % to display the new colors
skyplot(azimuth, elevation, GroupData=categorical(g))
legend()
Even though I could see that newColorOrder now contains 15 different colors its not reflected in the skyplot which still is using the initial default colors. Any suggestion why that is happening?
I also tried the following:
skyplot(azimuth, elevation, GroupData=categorical(g))
legend()
colororder(parula(15))
Even though it appears to give what I desired, the individual colors are most of the times indistinguishable ''visually''.
Thanks

Voss on 22 Apr 2022
⋮
Edited: Voss on 22 Apr 2022
Ran in:
When you set the ColorOrder of gca before calling skyplot, you are setting properties of the current axes, whatever it is. Then skyplot makes a new axes, so whatever you did to the old current axes is irrelevant for skyplot.
When you set the ColorOrder of gca after calling skyplot, then the current axes is the axes that skyplot created, so it works.
Now you just have to change parula(15) to a set of colors you prefer.
azimuth = 360*rand(1,15);
elevation = 90*rand(1,15);
g = rand(1,15);
skyplot(azimuth, elevation, GroupData=categorical(g))
legend()
colororder(turbo(15)) 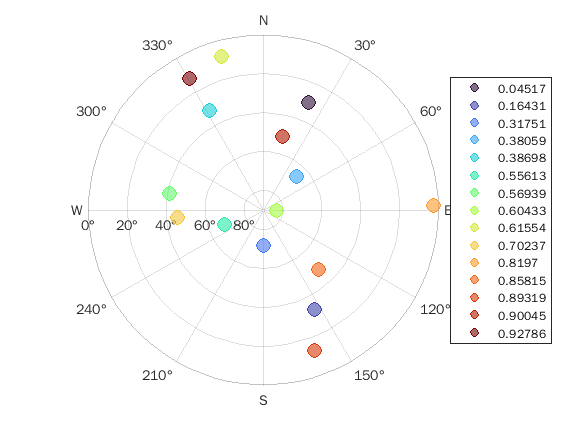 ⋮
Thank you - that was cool!

⋮
Also wondering whether it is possible to give a label to each of those satellites shown as different colors when I have a track/trajectory of the satellite in the skyplot. I could use:
skyplot(azimuth, elevation,prn, GroupData=categorical(g))
where prn could be used as the label but if there are multiple points (i.e. a track) for a particular satellite then the prn number would repeat throughout which makes the skyplot look messy. Any way to just have the prn number once instead of repeating?
Thank you 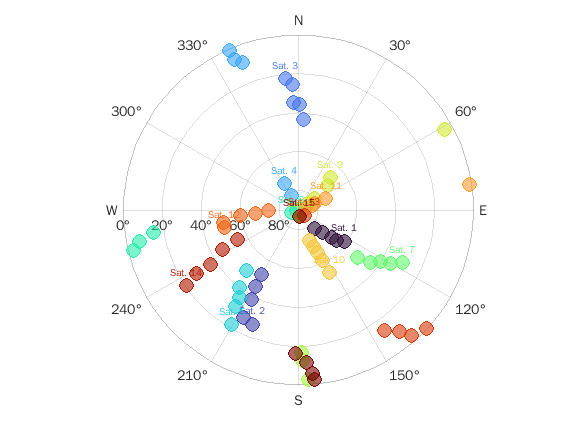 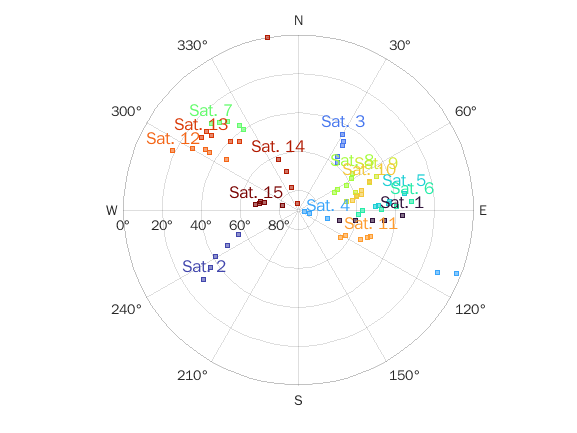 All the properties you might want to mess with:
https://www.mathworks.com/help/nav/ref/nav.graphics.chart.skyplotchart-properties.html

⋮
Thank you much for the help. Works like charm! 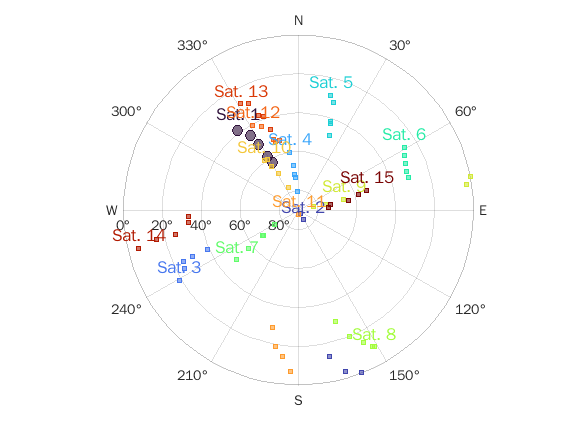 Note that MarkerSize is a vector with one element per data point, so you can have them vary however you want:
% construct marker sizes
ms = (90-elevation).^1.5.*abs(cosd(azimuth));
skyplot(azimuth(:), elevation(:), prn(:), MarkerSize=ms(:), LabelFontSize=12, GroupData=g(:))
% legend() % don't need the legend if you have labels
colororder(turbo(n_sat)) 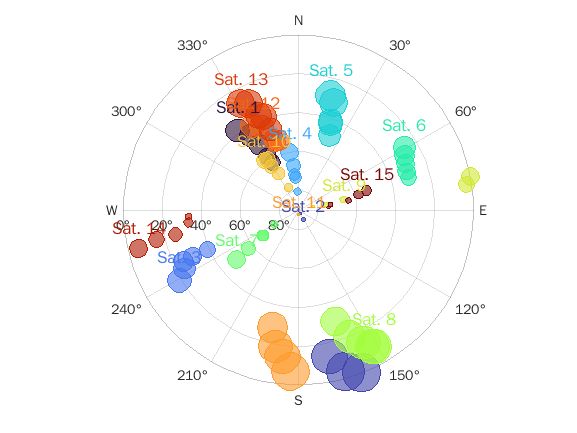