“The model reuse and efficiency improvements enabled by MATLAB and Simulink save time and lower costs. We estimate a time savings of more than 50% is achievable with Model-Based Design compared with hand-coding, and the advantages of Model-Based Design increase with the complexity of the project.” 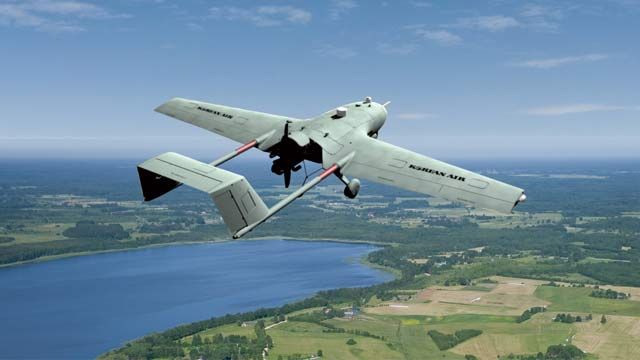 “Model-Based Design enabled our team to establish a process that can be used on multiple UAV platforms. That process includes modeling and simulating the system, automatically generating production code, and verifying that our generated and handwritten code is free of run-time errors,” says Jungho Moon, senior flight control system engineer at Korean Air. “As a result, we eliminated potentially critical errors early in development, increased development efficiency, and reduced development costs.”

In the past, Korean Air engineers hand-coded UAV flight control software. The company identified several drawbacks to this approach, particularly when a single flight control system targeted multiple UAV platforms. First, the algorithms the team was developing were too complex to program in C by hand. Second, they needed to be able to deploy hardware specification changes and the latest control algorithms quickly. Third, manual code reviews and unit tests required too much time and effort to complete.

To meet an unmovable deadline for flight testing and certification, Korean Air needed to shorten development by simulating design models, automatically generating code, and verifying the generated and handwritten code.

In the early phases of development, the engineers developed a Simulink® model to refine and validate high-level requirements.

The engineers developed a dynamic model of the UAV, including landing gear dynamics for simulating automated take-off and landing, with Aerospace Blockset™. Later they used System Identification Toolbox™ to estimate model parameters for flight dynamics and performance verification.

The flight management and control system, including the automatic landing guidance subsystem, was modeled in Simulink and Stateflow®.

After running desktop simulations to verify the flight control laws and collect control response data, they analyzed the results, and later, flight test results, in MATLAB®.

Using Simulink Check™ and Simulink Coverage™, the engineers performed regular checks to ensure the model complied with the company’s modeling standards (based on MAAB guidelines) and to measure 100% MC/DC model coverage for their test suite.

The team generated more than 45,000 source lines of code from their models with Embedded Coder®. They integrated this C code with code they had handwritten for hardware drivers, and they reused test cases for model coverage to measure 100% MC/DC code coverage.

Using Polyspace Code Prover™, the team checked all the code for run-time errors, identifying several in the handwritten code that they subsequently corrected. No run-time errors were found in the generated code.

The team conducted real-time HIL simulations with Simulink Real-Time™. The HIL model, which contains more than 11,000 blocks in the flight control and flight dynamics submodels, was reused to create an operator training simulator for the UAV.

Korean Air completed development on schedule, and the UAV has received airworthiness certification from the Korean government.