When someone has a heart problem, doctors turn to a tool developed over 120 years ago, the electrocardiogram (ECG). ECGs allow doctors to see what’s occurring inside the heart without surgery or expensive imaging tools. They record the heart’s electrical signals through the skin via sticky electrodes adhered to a patient’s chest. The signals appear on a monitor in spiky waves. Doctors can detect abnormal heart rhythms or heart rates and signs of heart attacks or high blood pressure by decoding those readouts.

But there have been few updates to the technology since 1954, when the American Heart Association published their recommendation for standardization of the 12-lead electrocardiogram. The ECG’s glaring weakness is its imprecision since it doesn’t show the precise source of the problem. That’s a significant issue for arrhythmias, which can lead to stroke or heart failure, because treatment relies on precision.

“The main problem is that we do not know what’s going on in each patient, so we cannot cure them,” says Andreu Climent, co-founder and CEO of medical device startup Corify Care.

The Corify Care Acorys® system is poised to be the most significant ECG update since 1954. The noninvasive technique, powered by artificial intelligence, will improve diagnostics, reduce costs, and save patients’ lives.

Carefully coordinated circuitry governs the heartbeat. Pacemaker cells in the upper right chamber, or atrium, generate electrical signals that move to the ventricles below. As the current goes through the atria, they pump blood into the ventricles. The ventricles rapidly contract, forcing blood out of the heart and through the rest of the body.

But changes to the heart, such as overexertion or medication effects, can disrupt this electrical cascade, throwing the heart off its rhythm. In an arrhythmia, the electrical signals follow a different path, turning around a point. Doctors typically turn to ECGs to detect this change.

One of the most common arrhythmias is atrial fibrillation (AFib). “AFib is one of the most difficult to treat,” says Javier Milagro, chief operating officer at Corify. “It’s quite erratic and much more complex than other kinds of arrhythmias.”

Sometimes the arrhythmia resolves on its own. When it doesn’t, early therapies involve medication or shock treatments to reset the rhythm.

Patients may require surgery in cases where AFib doesn’t resolve with those therapies. Doctors ablate, either burning or freezing, a section of the heart’s tissue to create small scars that disrupt the problematic electrical signals and bring the heartbeat back to normal. But this procedure doesn’t work for over half of the patients. Sometimes, the surgery doesn’t work because it isn’t the right treatment option.

Acorys provides doctors with a near real-time map of the heart and its electrical activity. (Image credit: Corify Care)

“The problem with determining if surgery is the right option is that the only way to see where the arrhythmia is making turns is to get inside the heart,” says Climent.

Doctors can map the heart with precision, but only invasively after they’ve already started the surgical catheter ablation procedure. They move an electrode tip through the muscle to record activity from different points, which allows them to locate the problem area.

“But what happens if the surgeon cannot burn the region? You cannot burn everywhere,” says Climent. “In that case, the catheter was introduced for nothing because you cannot cure that arrhythmia.”

If doctors could identify with certainty where the problem originates before the surgery, they could better target the treatment and avoid unnecessary procedures. Acorys solves that problem.

From Prototype to Product

Corify Care was over a decade in the making. Before founding the company, Climent and co-founder María Guillem, Corify’s chief scientific officer, worked together at Valencia Polytechnic University in a translational cardiology lab. Initially, they had no intention of entering the medical device startup space and being the ones to put their research to practical use.

Their early work focused on understanding the foundations of the heart’s bioelectronics. They conducted experiments in single cells and cell cultures. They used MATLAB® to create mathematical models of cells, later progressing to models of the entire heart.

“Instead of processing signal by signal as you do in other programs, with MATLAB, we can process all signals as a whole, in parallel.”

They also developed signal processing tools for mapping the heart that would eventually form the basis of Acorys’ mapping ability and patented the core technology in 2015. “But we never thought we’d start a company,” says Climent. Two years later, Climent applied to the Caixa Impulse Program. The program is for postdoctoral biomedical researchers with patented technology, training successful applicants in entrepreneurship, giving them a crash course in the biomedical industry, and providing seed funding.

In 2018, Climent drew up a business plan with Guillem and the other two co-founders, Felipe Atienza, the chief medical officer, and Francisco Fernández-Avilés, president of Corify’s scientific advisory board. They worked with investors and established the company in 2019. Once the company was launched, they applied to the MathWorks Startup Program to continue their work with MATLAB. 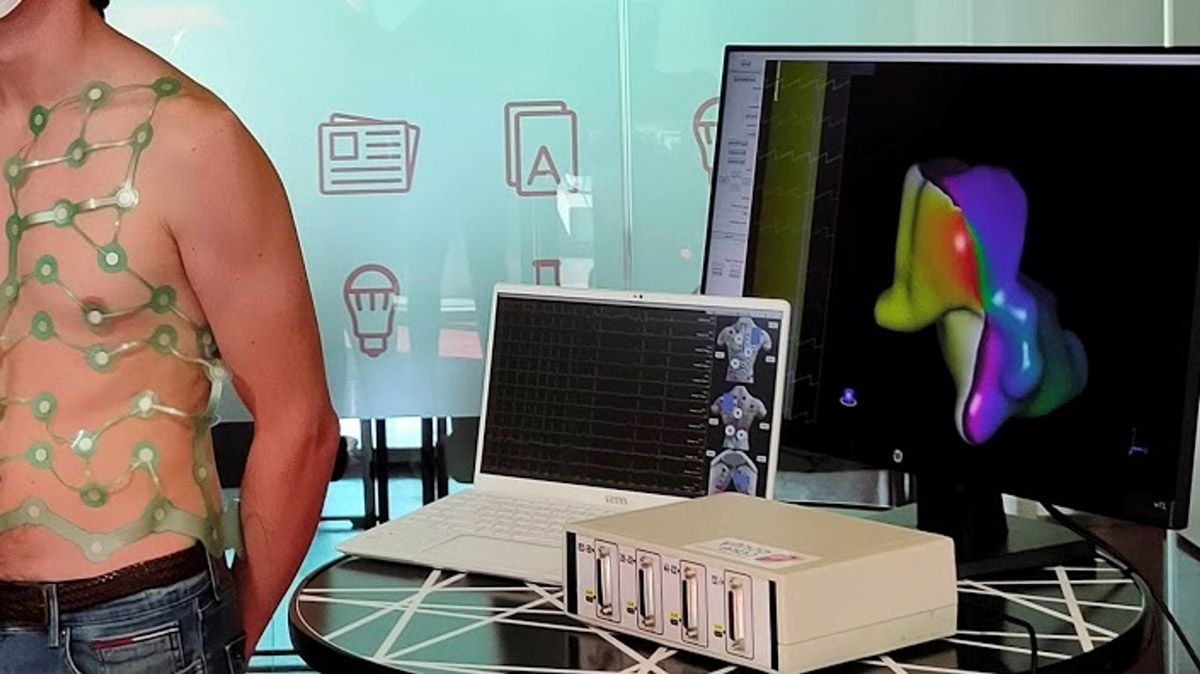 The team quickly grew, and in the summer of 2020, Milagro and David Lundback, the chief technology officer, joined, tasked with refining the Acorys prototype. “All the knowledge was already there,” says Lundback. “We just had to take the prototype and turn it into a product.”

They needed to turn Acorys into a user-friendly system that could produce a 3D map of the heart’s surface, showing how electrical signals propagate through the tissue. At the outset, Acorys was hard to use. The setup alone took around an hour and a half. A technician needed to attach 64 electrodes one by one to the patient’s back and chest. A video system recorded the patient’s torso, and a photogrammetry process took the images and converted them into a map of the torso.

“The setup process was long and complicated,” says Lundback. “We studied the flow of the system to determine how to make it more functional.”

Over the next year and a half, the Corify team made Acorys more efficient, reducing setup time to 10 minutes while speeding up the mapping process. Milagro refined and organized the code that processed the cardiac signals. He needed to figure out how to filter noisy signals from the electrodes, such as electrical activity in other muscles or disturbances to the recording from deep breathing.

Milagro also had to contend with what the medical community calls the inverse problem of electrocardiography—or the issue of using body surface recordings of electrical activity to reconstruct activity in the heart accurately. Knowing the torso’s geometry and which electrical signals are coming from which part of the torso, one can work backward to reconstruct the heart. Milagro also needed to consider whether these algorithms could be used in all patients. Because each person has a unique heart and torso shape, the heart’s electrical activity travels differently within each patient, which Acorys needed to account for.

Given the complexity of these problems, Milagro says MATLAB was a valuable tool. The Corify team used MATLAB for signal processing techniques and machine learning to filter noise, producing cleaner data that went through further signal processing to solve the inverse problem. They trained the algorithms with data from both patients and mathematical models, allowing Acorys to take electrical signals from any patient and convert that into a map of the heart.

“Instead of processing signal by signal as you do in other programs, with MATLAB, we can process all signals as a whole, in parallel,” says Milagro, which also meant the algorithms could process information in almost real time.

Lundback focused on the hardware. Instead of dozens of electrodes and cables, the team created a vest-like sheet of 128 electrodes. Now, a technician merely places four sheets on the patient’s body, covering the chest and back. Markers over the electrodes display local codes that the upgraded camera system automatically recognizes.

A 3D camera attached to an iPad enables real-time scanning in the upgraded camera system. The operator walks around the patient using the iPad and camera system to scan the patient’s upper body covered in the electrodes. The Corify team developed algorithms that use those images to model the torso’s geometry. Now, the team is closing in on the final product.

A New Era in Cardiology

The system’s components come together in Acorys to provide doctors with a near real-time map of the heart and its electrical activity. “Acorys is halfway between an electrocardiogram and the invasive catheter procedure,” says Milagro. “We get similar results to the invasive mapping with catheters but do so noninvasively as with ECGs.”

"When you know that your system has helped to cure someone, for all of us engineers, it’s like magic.”

The map appears on the monitor, refreshing every five seconds, allowing the physician to assess the heart’s activity over time. Differing colors on the heart map show the timing of the electrical activation—red symbolizes earlier activation, and dark blue shows later activation, with a rainbow of colors in between.

“We can see how the electrical activity propagates through the cardiac tissue,” says Milagro. “For example, with a flutter, which is a kind of arrhythmia, electrical activity does not propagate in the usual way. On the map, it appears to turn around a particular point, showing the doctor where to target treatment.”

While initially developed for atrial fibrillation, Acorys can analyze other arrhythmias too. The team has developed different algorithms for this application because each arrhythmia has its particularities. 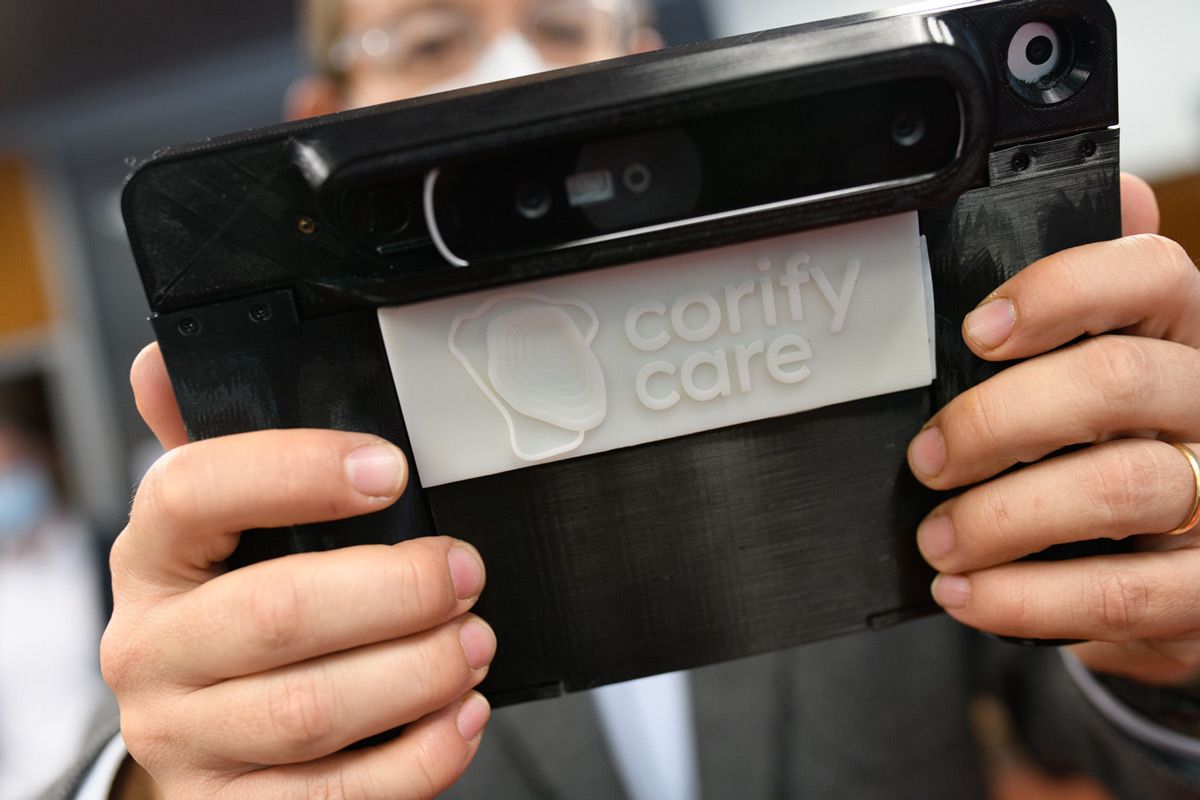 Corify tested its product’s accuracy during catheter ablation procedures, comparing Acorys’ output with the invasive mapping procedure results. While tests so far are promising, Acorys lacks the precision of the invasive technique.

Corify is enrolling patients for clinical evaluations needed to bring Acorys to market. They’re working toward obtaining CE Marking from the European Union and approval from the Food and Drug Administration in the United States. They hope to make Acorys widely available by 2023.

Once approved, the system could improve cardiac care beyond arrhythmias. “Doctors have been excited to apply Acorys to other cardiac problems, too,” Climent says. “They want to use its mapping capabilities for pacemaker placement, for example.”

So far, with testing in several hospitals in Spain, clinicians have used the system on nearly 200 patients, and the tool has impressed cardiologists. By providing a detailed, noninvasive look at the heart and its electrical activity, Acorys can prevent unnecessary ablation procedures, saving patients and the healthcare system time and money. And when a patient does need surgery for their arrhythmia, Acorys can point them to the cure.

“When you know that your system has helped to cure someone, for all of us engineers, it’s like magic,” says Climent.

Inspired by Her Family’s Story, Founder Hopes to Boost Healthcare Equity Through Tech

When You Know the Answer, Deep Learning Can Determine the Question

Long-Distance Robot-Assisted Heart Surgery and Beyond